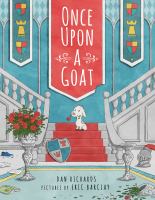 A young king and queen long for a child, but they're not too choosy. As the king tells their fairy godmother, Any kid will do. Still, it's unsettling when a little goat appears on their doorstep. Initially confined to the palace grounds, the little fellow looks so forlorn that night, standing in the rain, that the king and queen bring him indoors, and there he stays, increasingly beloved as he frolics happily each day. Later, the fairy godmother returns, realizes her mistake, and fetches the misplaced baby, who is quite happy with his goat parents. The child initially fears the king and queen but loves the baby goat. Luckily, the palace is large enough to accommodate both kids and all four parents. Is this the family the monarchs had wished for? No, says the queen, Better. Beginning with a familiar fairy tale wish, the story concludes in an unexpectedly open-minded way. Richards' simply written, enjoyable text reads aloud well. Working with pencil, watercolor, acrylic, and Adobe Photoshop, Barclay uses composition effectively to frame the story and draw attention to certain elements. A corner is chomped out of the right front endpaper, revealing a picture of the lovable little goat eating the missing piece. A fresh, amusing, kindhearted picture book.--Carolyn Phelan Copyright 2019 Booklist

Two monarchs who wish to become parents receive an unexpected happily- ever-after in this story by Richards (Penny and Penelope). After the privileged couple requests a "kid" from their fairy godmother, they receive a baby goat. The pair tries to look on the bright side ("We won't need to change its diapers"), but their unruly charge sows chaos, as captured in amusing, not-quite-medieval pencil, watercolor, and acrylic illustrations by Barclay (Sheep Dog and Sheep Sheep). The goat's insatiable appetite-even the book's first page has a bite taken out of it-is the last straw, and after the beast consumes the royal rosebushes, they send it away, until seeing it in a rainstorm causes a change of heart. When the fairy godmother checks in months later, she's bewildered: "You must be joking," she declares, realizing her mistake. Her visit to a goat family reveals a naked cherub among them, but no one seems happy when the fairy proposes a simple switcheroo. Luckily, there's an alternative, and what might have been "be careful what you wish for" turns into a more inclusive takeaway about family and its many forms. Ages 3-7. Author's agent: Ammi-Joan Paquette, Erin Murphy Literary Agency. Illustrator's agent: Lori Nowicki, Painted Words. (Aug.) Â© Copyright PWxyz, LLC. All rights reserved.