Many Bibliomation libraries have closed to the public indefinitely to prevent the spread of the coronavirus. Please contact your local library staff or consult their website for more information about the services they are providing during this time.
HomeLibrary Web Site Best Sellers & Award Winners Nutmeg Awards & Nominees Charter Oak Children's Book Award Kids Catalog

The magnificent migration : on safari with Africa's last great herds / Sy Montgomery ; with photos by Roger and Logan Wood. 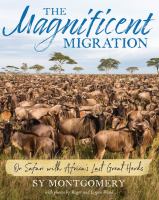 The Magnificent Migration : On Safari with Africa's Last Great Herds
by Montgomery, Sy
Rate this title:
vote data
Click an element below to view details:

The Magnificent Migration : On Safari with Africa's Last Great Herds

Sy Montgomery was born on February 7, 1958 in Frankfurt, Germany. She is a 1979 graduate of Syracuse University, a triple major with dual degrees in Magazine Journalism from the S.I. Newhouse School of Public Communications and in French Language and Literature and in Psychology from the College of Arts and Sciences. She was awarded an Honorary Doctorate of Humane Letters from Keene State College in 2004, and an Honorary Doctorate of Humane Letters from Franklin Pierce University and also from Southern New Hampshire University in 2011. Montgomery is a naturalist. She is an author, and scriptwriter. Her most popular book, The Good Good Pig, is a memoir of her life with her pig, Christopher Hogwood. The book became listed on the New York Times bestseller list in 2015. How to be a Good Creature: A Memoir in Thirteen Animals was published in September 2018. Her other notable titles include Journey of the Pink Dolphins, Spell of the Tiger, and Search for the Golden Moon Bear. (Bowker Author Biography)