The neighbors / Einat Tsarfati ; translated from Hebrew by Annette Appel. 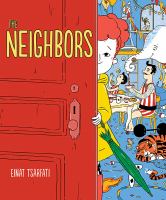 K-Gr 3-A young girl lives in an apartment building full of interesting characters, or so she thinks. From a family of thieves and a jungle explorer to a family of acrobats and a sewing vampire, the building is teeming with life. Each floor has a separate apartment with a unique door that sets it apart. The young girl lives on the seventh floor, her plain gray door marked with a simple plant and welcome mat. She thinks her parents are boring, but she is unaware of what they do once she falls asleep. The surprise ending in this zany and imaginative picture book is sure to have young readers going back to reread and look for clues. Each page is an attention grabber because of the vibrant colors and elaborate illustrations. The eccentricities of the cast of characters are compelling and readers will linger on each scene to absorb each intricate detail. The main character's vivid imagination is brilliantly reflected in the bold manner in which the illustrations are presented. The stark white pages that show each apartment's entry are a sharp contrast to the imagery of each dwelling's interior, again highlighting the power of imagination. VERDICT A unique and vibrant choice that artfully displays the dynamism of the imagination.-Amy Shepherd, St. Anne's Episcopal School, Middleton, DE Â© Copyright 2018. Library Journals LLC, a wholly owned subsidiary of Media Source, Inc. No redistribution permitted.

*Starred Review* A redheaded girl with a frog umbrella lives on the seventh floor of an apartment building. As she makes her way upstairs, she imagines who lives in each unit, based on clues surrounding the doors she passes. For example, the first door has so many locks because it belongs to thieves specializing in ancient Egyptian artifacts. The light shuts off by the fourth floor's apartment door because of the fashionista vampire living there. And there could clearly be no other explanation for another door's pickled fish scent other than that a pirate and mermaid live underwater inside. This book is one delightful, imaginative reveal after another, ending with a fabulous double-twist chuckle. The text is simple and elegant, supported by absolutely charming images, and it's icing on the cake that the illustrations are so internationally inclusive (the protagonist's bedroom, for example, contains a Native American dream catcher, a Russian matryoshka doll, a Chinese lantern, an African totem, and a Japanese den den drum hidden among the dinosaurs and space posters). While a portion of the magic may be lost in a classroom or library group read, it would be an absorbing lap or solo read because each room is depicted in such detail. The pages warrant long, wondrous examinations and afford readers almost endless satisfaction in the tiny discoveries awaiting them.--Becca Worthington Copyright 2018 Booklist

The girl with the bright-green frog umbrella who narrates this tightly focused story has invented tales about her building's residents based on the distinctive appearance of their doors. The first has several locks and a surveillance camera. "That apartment belongs to a family of thieves," the girl announces; the apartment, revealed in a page turn, contains a symphony of luxurious museum pieces, and the family is dressed all in black, with face masks. The door on floor two is "always surrounded by muddy footprints." A gardener? No. "That is the home of an old explorer and his pet tiger." Each family enterprise is more unlikely than the next, and the spreads burst with appropriate domestic detritus; a vampire seamster's apartment (floor four) is littered with notions and art deco furniture. The girl's own apartment, by contrast, has ordinary furniture and an ordinary set of parents. Or does it? Tsarfati (An After Bedtime Story) offers accomplished execution, sureness of line, and restrained, urbane humor. Her story celebrates both imaginative power and the way great imaginations sometimes miss what's closest to them. Ages 4-8. (Jan.) Â© Copyright PWxyz, LLC. All rights reserved.