Many Bibliomation libraries have closed to the public indefinitely to prevent the spread of the coronavirus. Please contact your local library staff or consult their website for more information about the services they are providing during this time.
HomeLibrary Web Site Best Sellers & Award Winners Nutmeg Awards & Nominees Charter Oak Children's Book Award Kids Catalog 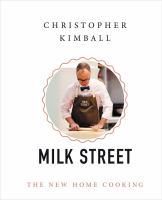 View other formats and editions

View all formats and editions (2)

Kimball, formerly of Cook's Illustrated and America's Test Kitchen, brings extensive test-kitchen expertise to his newest project, Milk Street. Fans of the aforementioned magazine and show (and related cookbook series) will find much to love in Kimball's similar (albeit briefer) approach here, explaining the whys and hows of recipe revisions to consistently produce the best results at home. But instead of focusing on American standards, Kimball travels the globe for simple cooking with big flavors and seeks to interpret them for home cooks. The author draws on his world travels to introduce dishes such as Korean pork and kimchee stew, Turkish beans with pickled tomatoes, and Spanish garlic soup. In many ways, he argues, these are the new standards: the idea of ethnic food is obsolete. Curry braised eggs, Thai fried rice, and Peruvian pesto could appear in any kitchen, just as pomegranate molasses, fish sauce, and za'atar are now stocked in many pantries. Overall, with its testing notes, short ingredient lists, and firm directions (each recipe has a don't section), this volume is a trustworthy and easy-to-use collection of international flavors from one of the nation's best cooking teachers.--Neumer Lara, Alison Copyright 2017 Booklist

Kimball, the former Cook's Illustrated editor, launched Christopher Kimball's Milk Street in 2016, a cooking venture that includes a school, magazine, and public TV and radio shows. This cookbook is the first from Milk Street, and its 125 recipes are an eclectic mix of dishes. All the recipes offer the reliability that Kimball is famous for, and there are lists of pantry staples and cooking tips included with some recipes to help readers get dinner on the table with ease. Flavors are gathered from around the world, with "supper" recipes that include Spanish spice-crusted pork tenderloin bites; soba noodles with asparagus, miso butter, and egg; and Peruvian pesto, made with spinach instead of basil. Egg dishes go from a simple scramble cooked in olive oil to curry braised eggs that promise to reinvent breakfast, and possibly dinner. Vegetable recipes are particularly interesting, and include cracked potatoes with vermouth, coriander, and fennel; sweet-and-spicy ginger green beans; and a sweet potato gratin with vanilla bean and bay leaves that shakes up the Thanksgiving staple. Dessert combinations are unexpected, such as rosemary-pine nut cornmeal cookies and date-stuffed semolina cookies. There are also nontraditional takes on standards, such as tahini-swirl brownies and rye chocolate chip cookies. Kimball's fans will be pleased with his latest cookbook. Agent: David Black, David Black Agency. (Sept.) Â© Copyright PWxyz, LLC. All rights reserved.