Back To Results
Showing Item 1 of 1 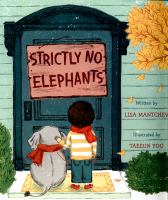 Lisa Mantchev is the author of many picture books, including the internationally acclaimed Strictly No Elephants , illustrated by Taeeun Yoo; Remarkables , illustrated by David Litchfield; and Someday, Narwhal , illustrated by Hyewon Yum. Lisa lives on the Olympic Peninsula of Washington State. Learn more at LisaMantchev.com. Taeeun Yoo has twice received the prestigious New York Times Best Illustrated Children's Book Award. She has illustrated many books, including Strictly No Elephants by Lisa Mantchev, which has been published in fourteen countries. The New York Times called it a "sunny, smart, tongue-in-cheek tale." She is also the illustrator of Kitten and the Night Watchman by John Sullivan, which received five starred reviews and was named a best book of the year by many publications. Her other books include So Many Days and Only a Witch Can Fly , both by Alison McGhee, and Round by Joyce Sidman. Taeeun was also the recipient of the Ezra Jack Keats Award and the Society of Illustrators' Founders Award. She lives in South Korea with her family.