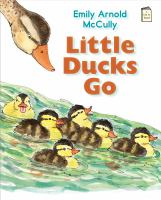 Search for related items by series

Emily Arnold McCully was born in Galesburg, Illinois on July 1, 1939. She graduated from Pembroke College, now a part of Brown University, in 1961 and received an M.A. in art history from Columbia University. After graduation, she held a variety of jobs in the art field that included being a commercial artist, a designer of paperback covers, and illustrating advertisements. When one of her illustrations was seen on an advertisement in the subway, she was asked to illustrate Greg Panetta's Sea Beach Express. She accepted that offer and went on to illustrate over 100 children's books. In 1969, she illustrated Meindert de Jong's Journey from the Peppermint Express, which was the first children's book to receive the National Book Award. Her first solo venture, Picnic, won the Christopher Award in 1985. Mirette on the High Wire won the Caldecott Medal in 1993. Her other children's books include Amazing Felix, Crossing the New Bridge, Grandmas at the Lake, My Real Family, and The Pirate Queen. (Bowker Author Biography)